Until August 27th in Paris, the Italian Cultural Institute presents the exhibition Raconte-moi une histoire (Tell me a story, ed.). An overview of the young Italian photography that shows the vivacity of the transalpine region. Fisheye focused on three artists to discover.

Located at 50 rue de Varennes, in the 7th arrondissement of Paris, the Italian Cultural Institute is offering the event Raconte moi une histoire. In this collective exhibition, nine young photographers present their works as eclectic as they are personal. In the tranquility of the lounges up to the garden of the Hôtel de Galliffet, visitors will be able to discover photographs by Alessandra Calò, Ilaria Crosta, Karim El Maktafi, Francesco Levy, Michele Palazzi or even Michela Palermo. Amongst these talents that are worth to visit, three reveal the diversity of Italian creation.

The originality of the hanging proposed by Giorgio Di Noto in The Iceberg is surprising. In a dark room, barely lit by Alessandra Calò’s lightboxes, the frames contain white monochromes. At the entrance, a black light lamp is at the disposal of the spectators. By this ultraviolet process, it is only by approaching the light source close to the works that the images will be revealed. Beyound its singularity, the scenography perfectly matches the subject treated by the artist.

It is by diving into the most submerged part of the web that Giorgio Di Noto has found his subjects. Although it is not referenced, the deep web represents 90% of the Internet.  Easily accessible, it however contains an encrypted part, the dark web, which can only be reached by using specific software, a key that can reveal the content. In this obscure universe, a market where everything imaginable is available but is often the worst, abstract images attract the shopper. LSD tabs, methamphetamine crystals… that is what the artist shows us. Giogio Di Noto thus opens the door to a space unknown to the general public.

The generation that grew up with the Internet is at the heart of the series presented by Frederica Sasso. With #PostAdolescence, the photographer chronicles the journey of this youth going into adulthood. It is a story of wandering, of the loss of landmarks, and of a life where reality merges with virtuality. In the codes it has chosen for itself, drawing from diverse representations, this generation builds its own world. When reality knocks at the door, among these adults in the making, those who will make up tomorrow’s society, many of them become anxious, and some drift away.

How can we fathom a future when all that is promised is a tomorrow condemned to precariousness, climate change, the automation of work and large migratory flows? Through her images, Frederica Sasso places herself as close as possible to her subject. With the gaze of someone who understands, without feigned compassion, but instead with an obvious tenderness, the photographer offers poignant portraits. Behind the scene, human feelings are expressed as brutally as they come. We do not know what tomorrow will be made of, but one thing is sure. It will made with them.

This generation seized by Frederica Sasso will also have to rebuild an environment destroyed by its predecessors. This alteration of the landscape by man and its current consequences feed Enrico Di Nardo‘s work. The artist turned his lens to Fucin, east of Rome. In this lowland formed by the drying up of a lake in the middle of the 19th century, the photographer found an amazing phantasmagorical atmosphere. An almost palpable tension arises from these desert landscapes.

Through a thin veil, a ghostly mist appears in what could be a fantasy film setting. It is not surprising that Enrico Di Nardo was one of 12 authors who paid tribute to the filmmaker David Lynch in the book A place both wonderful and strange. These images are a good summary of what the Raconte-moi une histoire exhibition has to offer. With a mastered technique, the young Italian photographer takes a generational look at an uncertain horizon. 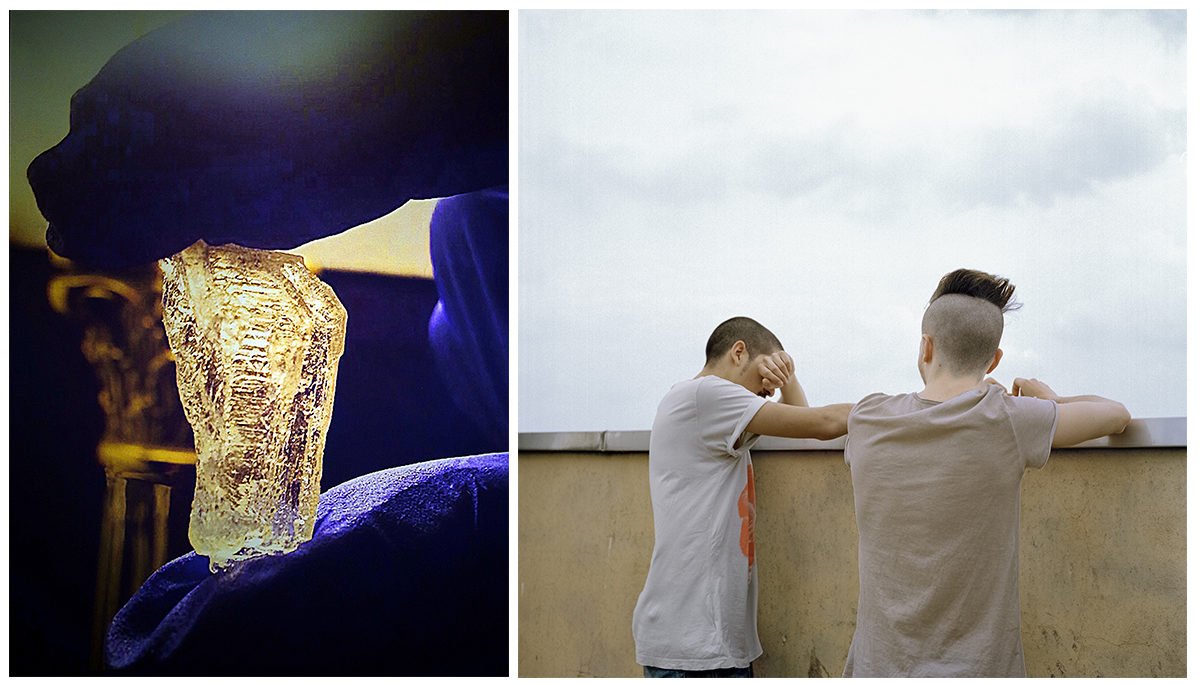